Farmer earns an additional $365/acre after land application of biosolids

In the summer of 2012, after the wheat harvest, Wessuc injected liquid biosolids in the south-east corner of a farm located in Brant County, Ontario. Wessuc was scheduled to spread biosolids on the field in July 2012 over a 7-day period as a municipal service. However, due to unforeseen circumstances, we were unable to apply the entire usable area. While we were disappointed about leaving areas of the field without biosolids, it provided the opportunity to collect crop response comparison data.

The following spring, the farmer took the prescription from the biosolids application and tried to match fertility levels using alkaline stabilized biosolids, a commercially available organic amendment, and commercial fertilizer. He applied this fertilizer on the area that had not been injected with biosolids before he planted his corn crop. The whole farm received an application of nitrogen later in the season.

In 2013, the spring was wet but the summer was dryer. On September 4, 2013, new Google Earth imagery was collected. The difference in crop vigor and uniformity was clearly visible. The area where biosolids were applied had a darker green hue compared to the area that received other amendments. This demonstrated the photosynthesis process was working well into the growing season especially during cob development.

During the grain fill stage, any stress on the photosynthesis process can reduce yield potential. Photosynthesis produces the energy (carbohydrates) that a corn plant needs to survive and produce grain. Drought, elevated temperatures, extended periods of cloudy weather, foliar diseases, hail damage, and nitrogen deficiency can, individually or in combination, significantly reduce photosynthesis. 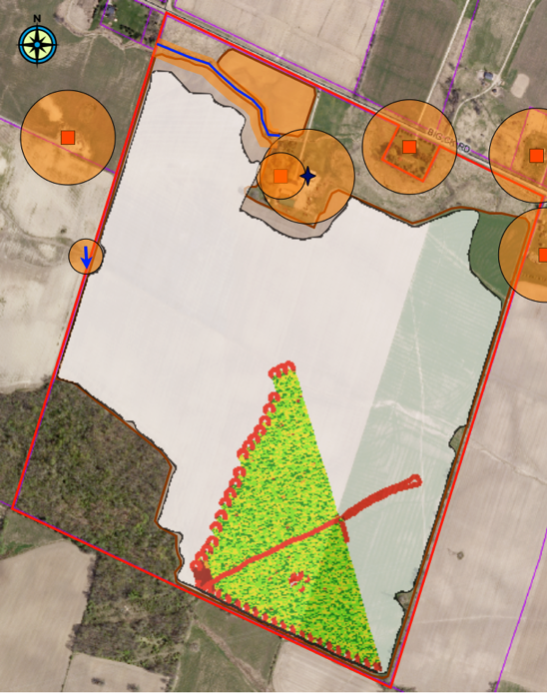 The corn was harvested that fall and the data recorded from the yield monitor was compiled. The area where biosolids were applied showed a significantly positive yield response compared to the areas that received other amendments. Areas where biosolids were applied consistently yielded above 185 bushels per acre (bu/ac) and reached a maximum of 270 bu/ac. The average yield in the surrounding area was around 150 bu/ac. Biosolids consistently provided a yield advantage of 50 bu/ac or more.

This study clearly documents the beneficial response in soil and plant health related to biosolids application but it also provides the data to calculate the economic advantages to the farmer. In order to match the amount of plant available forms of nitrogen, phosphorus and potassium, the farmer would have to spend an average of $140/ac. The yield advantage provided an estimated increase in profits of $225/ac (50bu/ac @ $4.50/bu). The overall estimated economic advantage to the farmer in this case was $365/ac.

LEARN HOW TO DO A WASTEWATER AUDIT

Our 10-step checklist will teach you how to do it all, from assembling the right team to reporting for maximum results (and recognition).

LET US DO THE AUDIT FOR YOU

All it takes is a candid conversation at your facility where we learn about your processes, problems and goals. We'll take some samples for analysis, and return with recommendations.

23 questions about your company's wastewater you can't afford to ignore

SEE ALL THE QUESTIONS